Potable water is a precious commodity, and in many cases the infrastructure used for storage doesn’t get much attention until a problem is identified. However, once a problem becomes evident, the rehabilitation of these massive storage tanks can be a major concern, both financially and environmentally for the counties and municipalities who count on them for fresh water. Often the aging infrastructure and supporting technologies (coatings, linings, piping, etc.) is deteriorated beyond the point of a simple rehabilitation patch job, at which point it’s time to look for a system that is extremely durable, environmentally safe, and long-lasting. 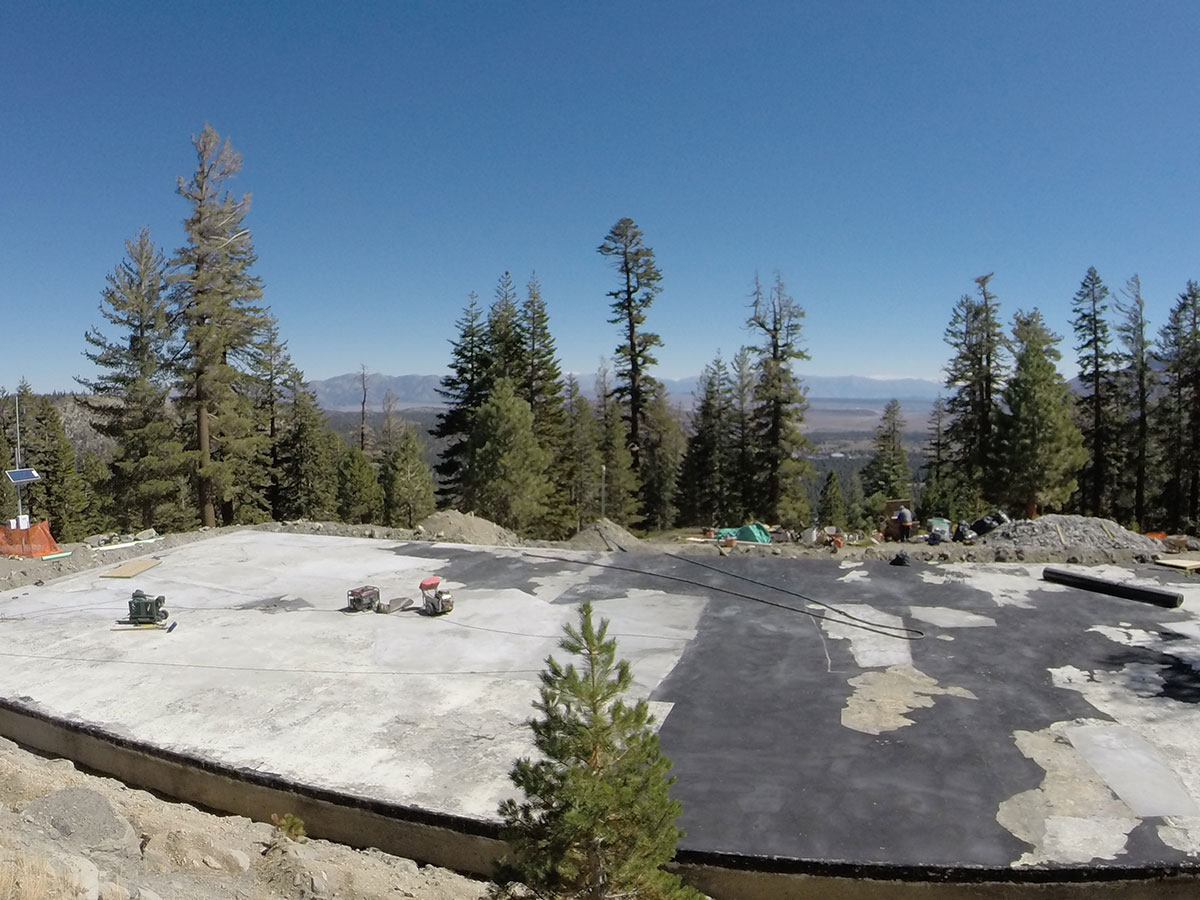 The Mammoth Lakes Community Water District found themselves in exactly this position with one of their 500,000 gallon potable water tanks, and needed to find a solution quickly. After submitting a bid for the job, TopLine Engineers was selected to handle the complex project using VersaFlex AquaVers™ 405 Potable Water Polyurea coated fabric for the interior of the tank, and VersaFlex FSS 45DC™ Pure Polyurea coated fabric for the exterior of the tank. TopLine recommended VersaFlex products to ensure reduced downtime, reduced need for extensive concrete rehab and preparation, and because they are a superior material selection for extended service. 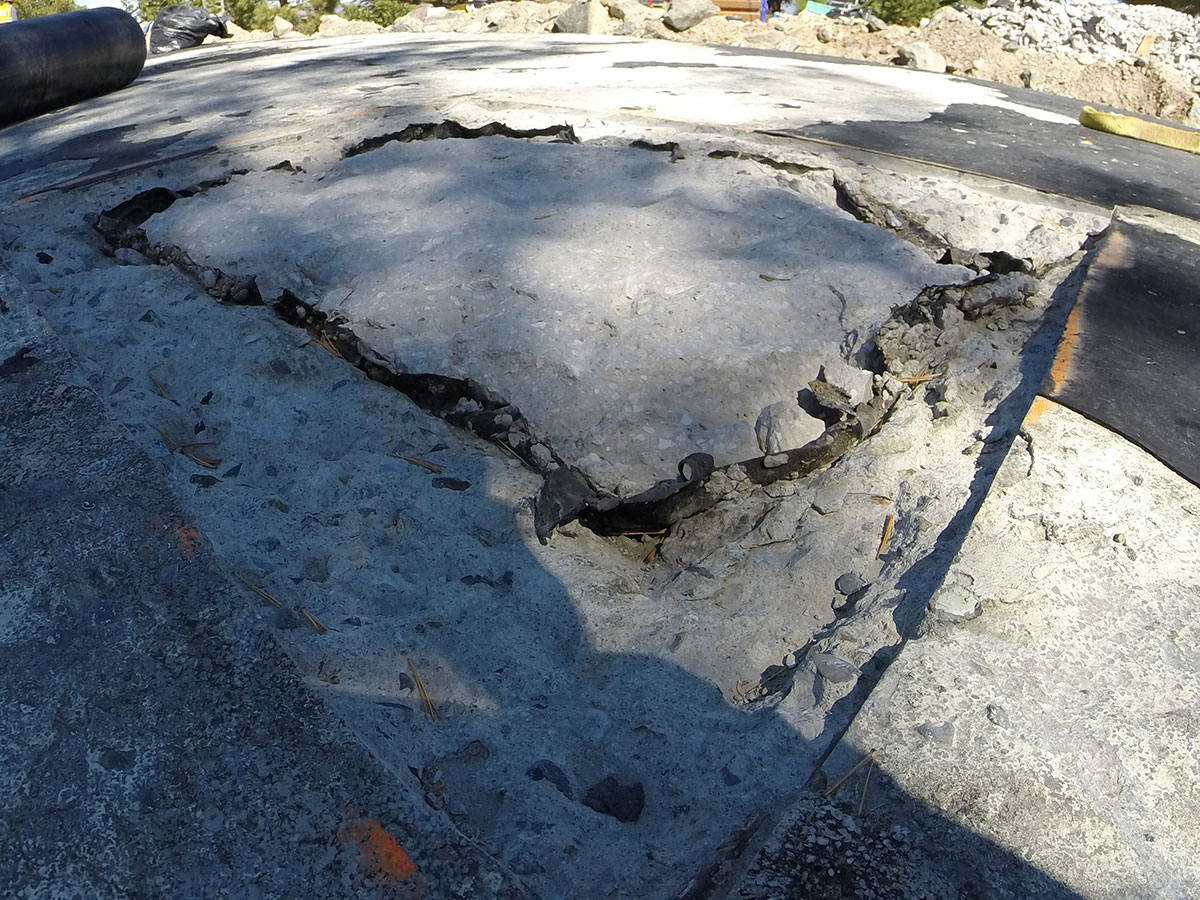 Once these steps were completed, application of VersaFlex materials could proceed. For the top of the tank, it was necessary to remove the existing coating and repair the degraded areas using a polymer modified cement. Subsequently, fabric was laid out with 6 inch overlaps at all seams. Care was taken to ensure that the geotextile was positioned to conform to the surface irregularities as much as possible. Excessive wrinkles were avoided. 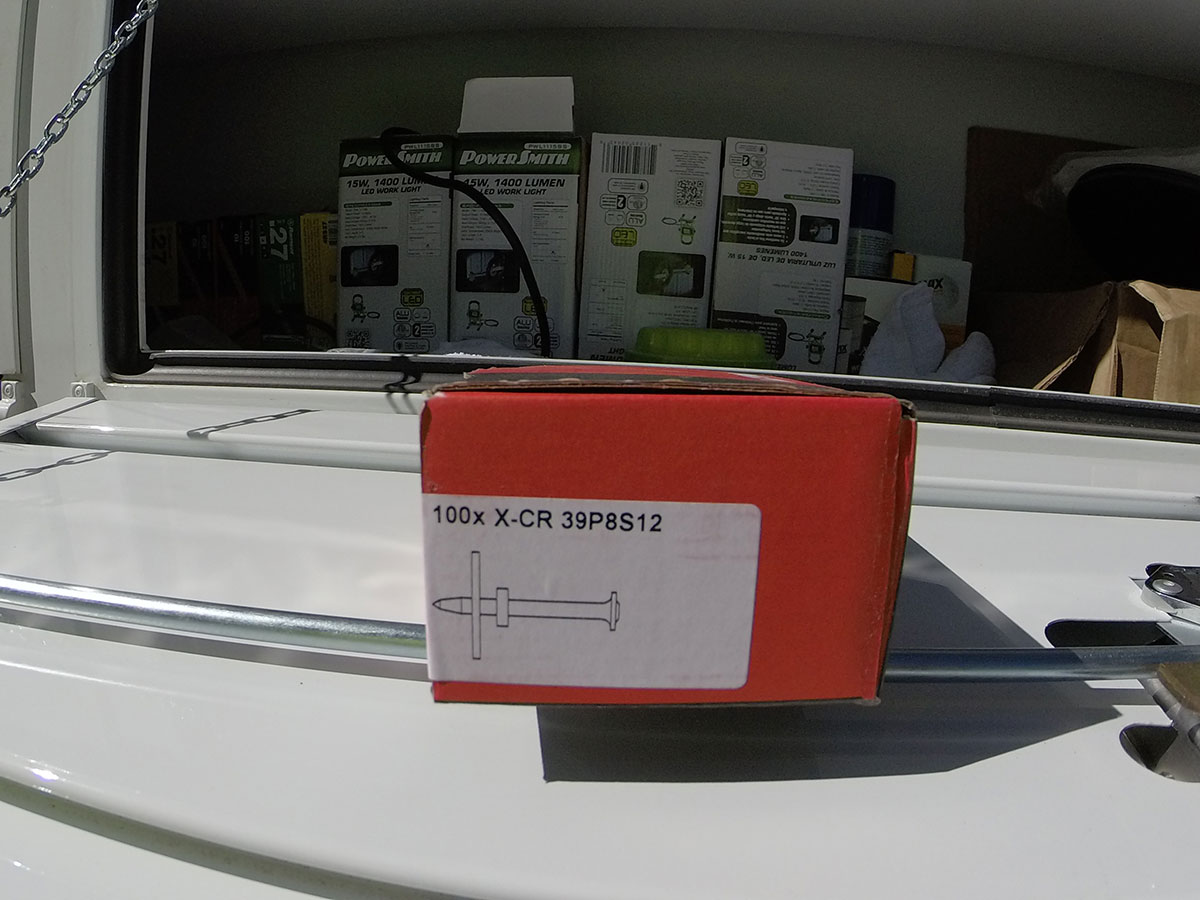 After draining the tank, it was evident that the existing coal tar epoxy was riddled with water-filled blisters. Removing the failing coating added a delay before installing the fabric PUA system. Dehumidification was not necessary because of the dry climate. The same fabric application and spray procedures were adhered to as above. Liner termination was above the water line and direct to the prepared concrete substrate. AquaVers™ 405 polyurea was sprayed to a minimum of 80 mils on the interior, over the applied fabric. 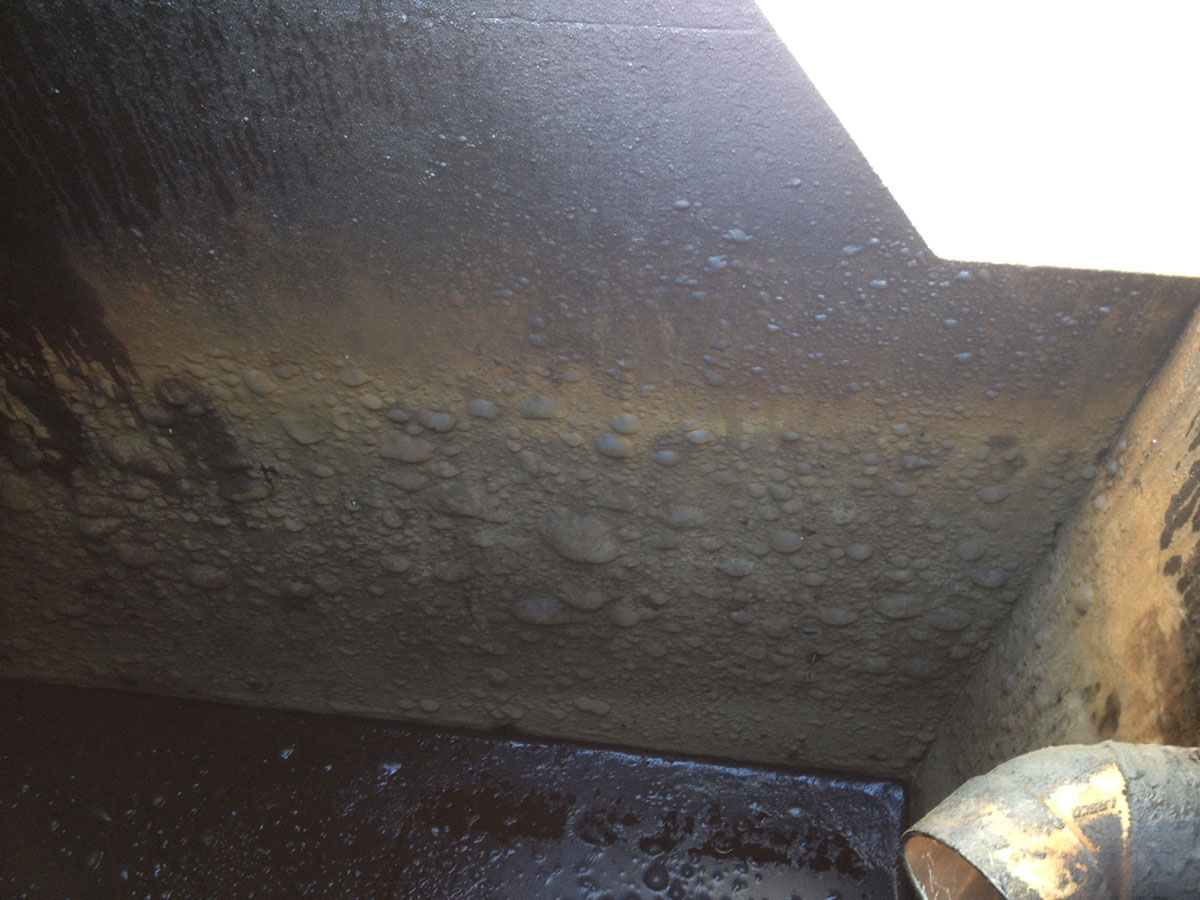 Both interior and exterior portions were completed using Graco EXP-2, 150ft of hose, Fusion AP using 4242, 2222 tips. These were housed in a mobile box truck with a tow behind generator for power. 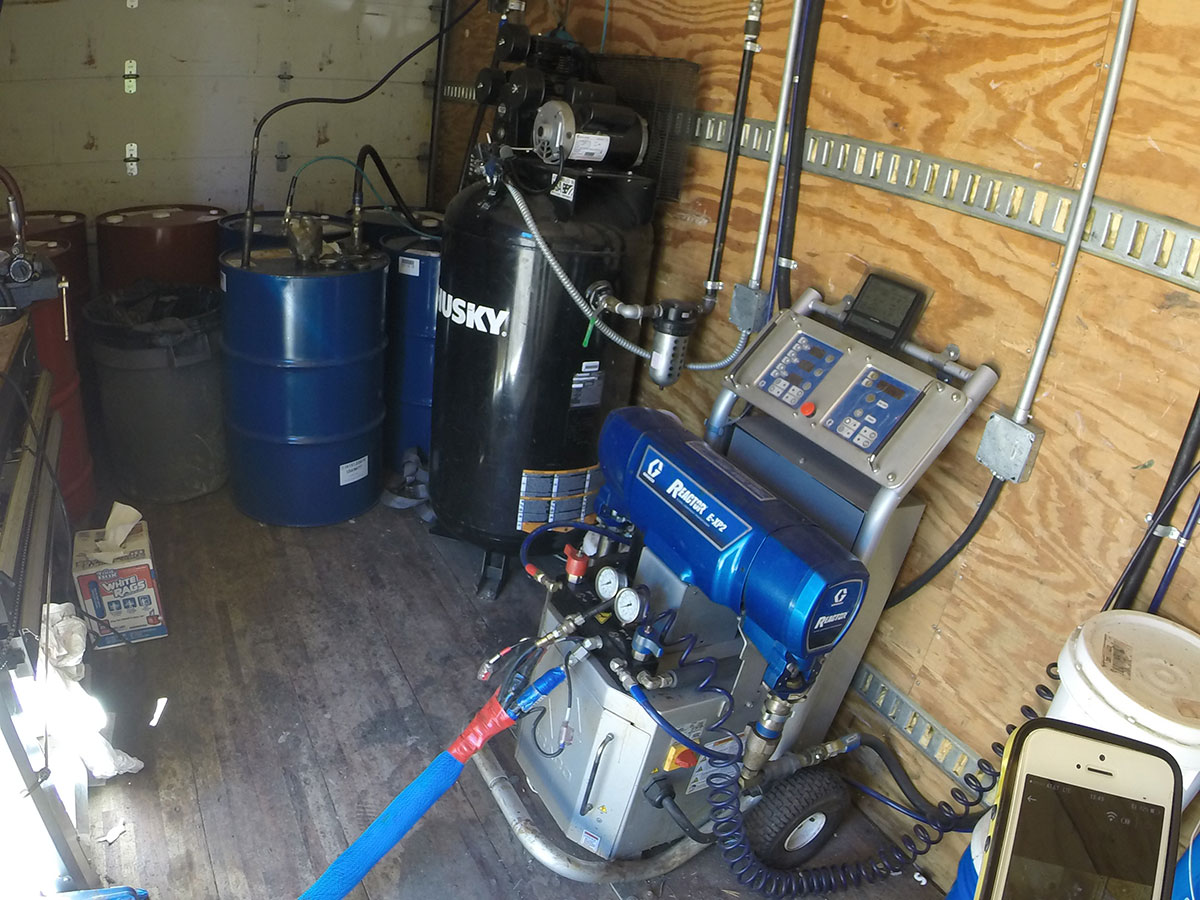 While this project can be simplified to highlight the use of VersaFlex materials, there were many factors that complicated the job: 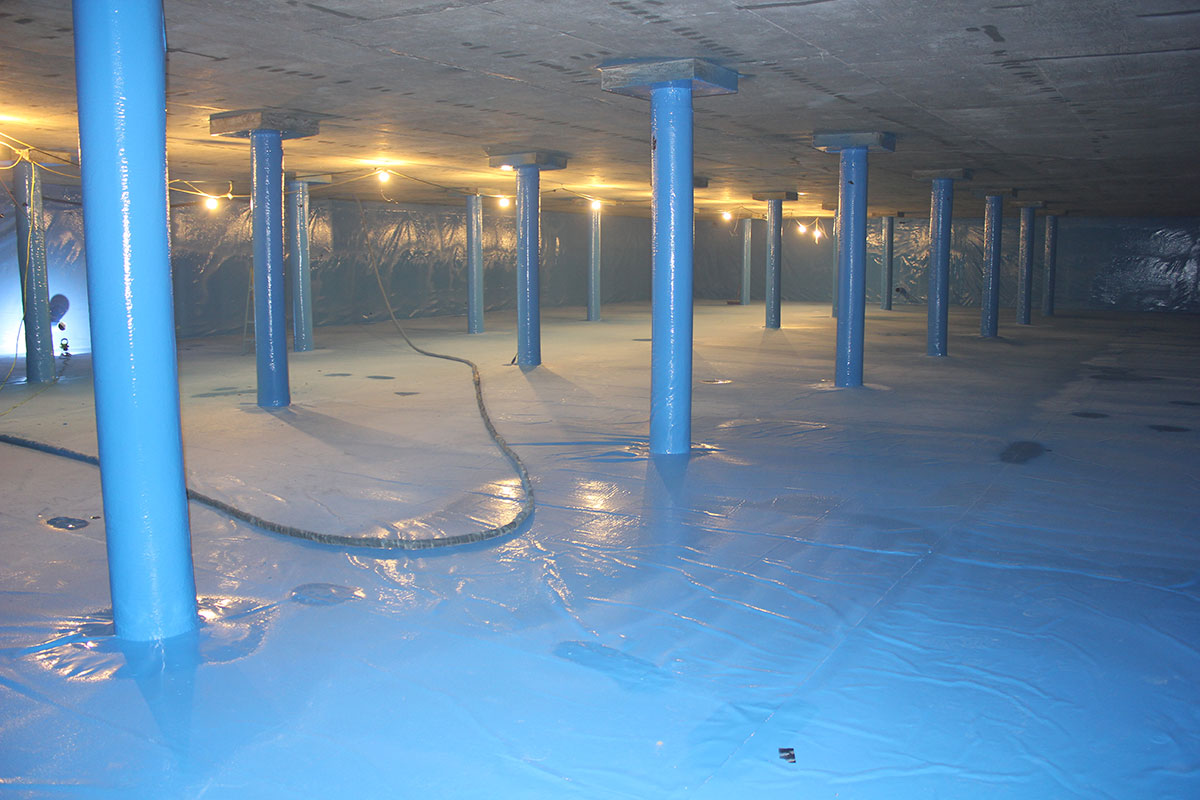 During design VersaFlex was chosen by engineers (Water Works Engineers) for our knowledge and experience with Polyurea and proper specification. VersaFlex continued to support the specification efforts with Mammoth Water District to rehab the concrete using PUA instead of Hypalon or other sheet good membranes. Multiple applicators bid the job, but only Topline possessed the general contractor licensing required to bid / complete the entire project. With continued support from VersaFlex, Mammoth Water District felt comfortable moving forward with Topline Engineers as the contractor. At the completion of the job, VersaFlex / TopLine were immediately referred to a 27,500 sq. ft. reclaimed water pond as well as an additional water tank slated for spring 2017.

About TopLine Engineers:
Headquartered in Hayward, California, Top Line Engineers are a licensed, bonded and insured General Contractor business serving the Bay area and beyond. Top Line Engineers provide a wide range of services, including specialty walls and ceilings, insulation services, demolition, abatement services, solar energy, and much more. Identifying the huge potential for polyurea applications, Top Line has recently focused their efforts to target the the water and wastewater markets.