Fiberglass is a strong, lightweight, formable and somewhat flexible material used to manufacture everything from boats and automobiles to water park slides. There can be a health cost, however: The resins, which typically contain styrene, that serve as a binding agent for the fiberglass strands emit hazardous volatile organic compounds (VOCs) during the manufacturing process. Consequently, the material is increasingly regulated by federal, state and local agencies. California, in particular, has it in its crosshairs. A recently developed VOC-free fiberglass alternative that uses a specially designed polyurea resin—AroStruct from VersaFlex (Kansas City, KS)—offers companies an affordable, nontoxic solution.

The resin substitute dries within 30 seconds and cures within 60 minutes. It can be used with a chopper-mounted spray gun to make parts and even molds or prototypes in minutes. Because choppers cut the fiberglass strands to the desired length and throw them in front of the polyurea resin leaving the spray gun, productivity is improved. The polyurea resin attaches to the chopped fiberglass strands and lays into the mold of the fiberglass part being manufactured. The technology is increasingly used by a maker of lightweight, tow-behind trailers that ran afoul of California regulators.

AroStruct® can be used with a chopper-mounted spray gun to make parts, molds and prototypes in minutes.

NestEgg Trailers manufactured composite fiberglass trailers in California, until it was fined $26,000 for VOC emissions. That’s when it decided to move out of state—the company is now based in Hayden, ID—but also to clean up its act, so to speak.

NestEgg Trailers tried hand laying traditional polyester resins into a fiberglass matrix, but that only worked in boutique applications. “As we got busier, we had to change because we were emitting too many VOCs with higher production,” said company owner Vince Austin.

It also tried vacuum infusion: A sealed bag is placed around each part undergoing the vacuum infusion process to contain and remove the VOCs. “After we did a couple of trailers that way, we realized no one would be able to afford the labor involved,” said Austin, adding that the process generated a large amount of bag and sealer waste.

NestEgg Trailers then tried epoxy as a fiberglass-binding agent to lower its VOCs. “The problem was that epoxy is very costly, all hand laid and cannot be sprayed in a fiberglass chop machine, so it was cost and labor prohibitive,” says Austin. 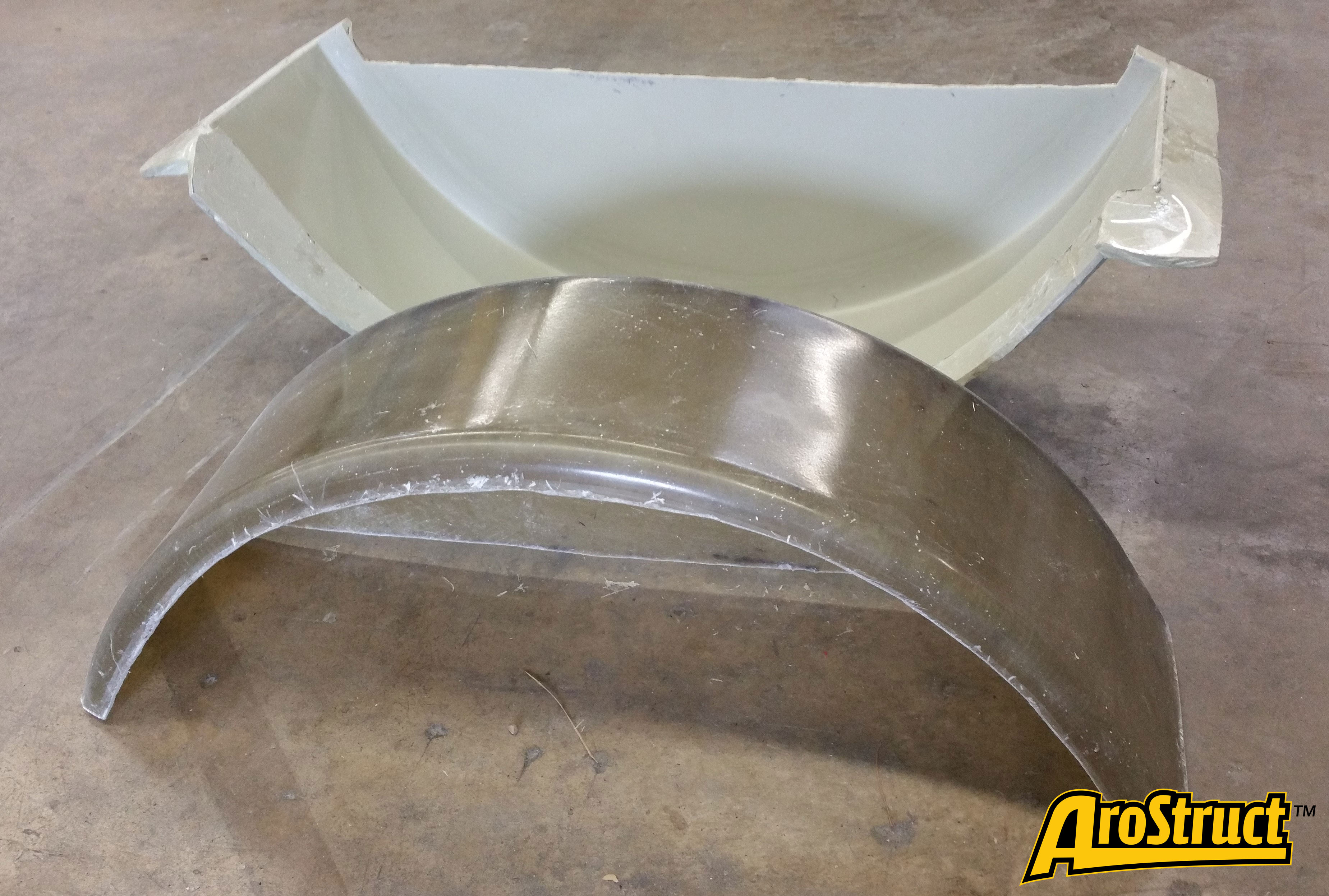 NestEgg Trailers make a fender mold in minutes with AroStruct®.

The company now uses AroStruct, which has lowered labor costs by 50% and moldmaking costs by 75% compared with traditional fiberglass manufacturing methods, according to Austin.

Spraying is achieved with a plural component spray gun connected to a long heated hose and pump machine. Unlike epoxy, which has a short pot life, the structural polyurea’s components are mixed in the spray gun nozzle during application, so there is no pre-mixing needed and essentially no waste in the process, according to VersaFlex.

The polyurea product is also waterproof and exhibits superior physical properties such as hardness, high elongation and tensile strength.

“We’ve found AroStruct to be at least as strong and flexible as traditional resins, but without the VOCs, so we can spray indoors or out and meet regulations,” says Austin. “We were looking for the right combination of strength and elongation, and VersaFlex worked with us to optimize the formula for our process.”

The structural polyurea, in fact, enhances the structural integrity of substrates like a suit of armor, albeit one that can receive a decorative topcoat. 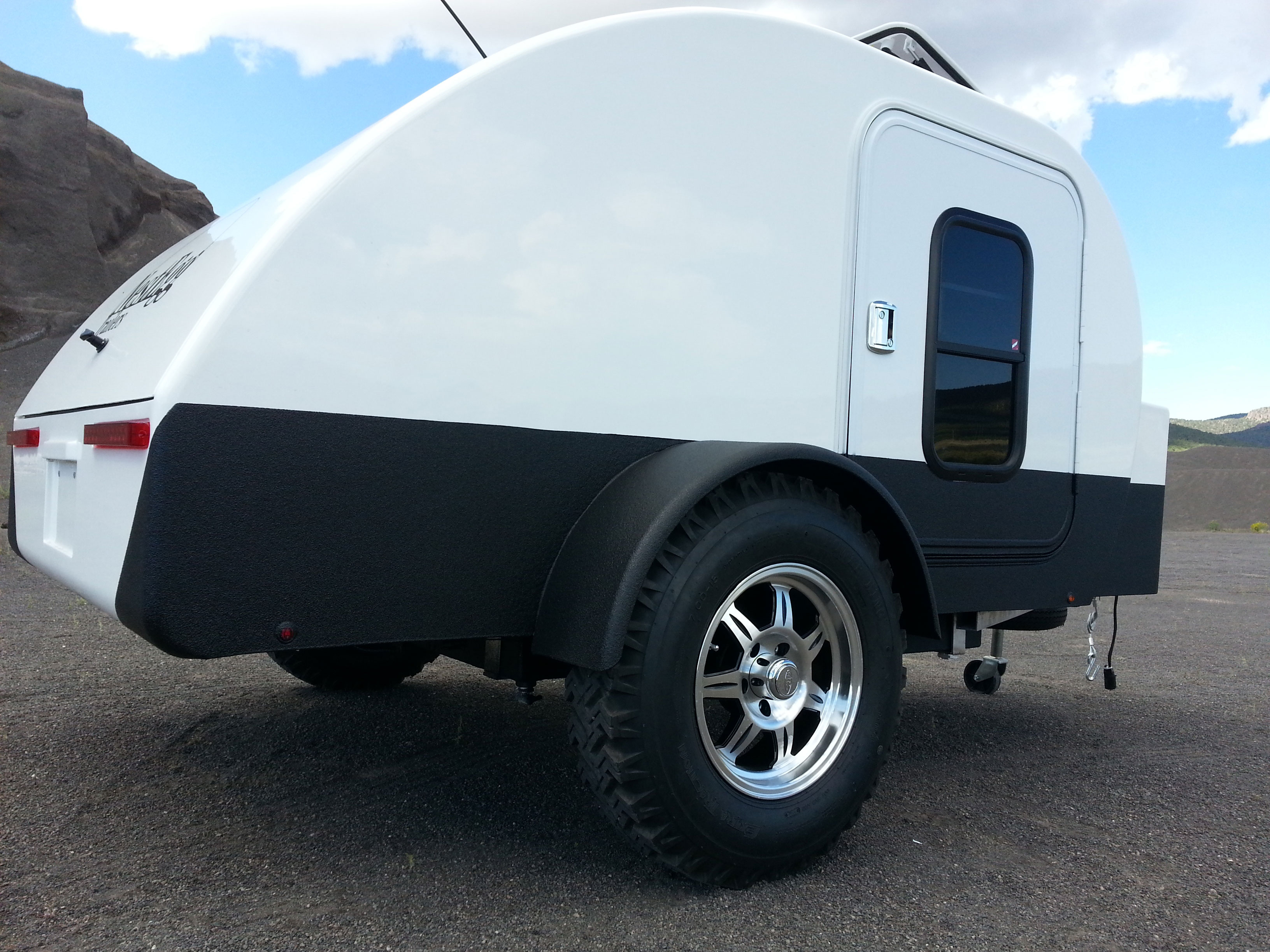 To boost productivity, Austin mounted a fiberglass chopper on the spray gun. “Since the structural polyurea is so easy to apply with the spray gun mounted chopper and dries so quickly, we’re making product in about one-tenth the time we used to previously,” says Austin.

NestEgg Trailers now uses the structural polyurea in about 75% of its fiberglass part-making processes, with the goal of fully transitioning over from polyester resins as soon as possible.

According to Austin, however, one of the greatest benefits of switching to structural polyurea is how it expedites the process of making molds for parts.

“The traditional moldmaking process, using polyester or epoxy resins, is very costly and labor intensive,” says Austin. “It can take weeks to hand lay the fiberglass. I paid $70,000 to a company that made my first mold out of polyester resin, hand-laid fiberglass.”

Instead, NestEgg Trailers now uses the structural polyurea for the rapid prototyping of new designs or to cost effectively create production molds to increase production.

“When we first made a fender mold with AroStruct, we made the mold in minutes and it works flawlessly,” says Austin.

According to Austin, he used his vendor’s powder-coated steel fender as the mold’s plug, or mold master part. “We simply waxed the part, put clay in any pockets or holes, then sprayed the fender with just the structural polyurea. When that dried within 30 seconds, we peeled the piece off the painted fender surface and had our mold.

“While more complex molds still require a cage around the part, we can make a mold in about one to two days that would typically take one to two months using traditional resin,” said Austin. “We no longer have to wait years to recoup the sky high cost of traditional moldmaking.”