Download full PDF as it appeared in Coatings Pro Magazine

What do you get when you take a major pipeline company and add in two deteriorating storage tanks and a mandatory shut-down during restoration? You get a tight deadline, a fast fix, and the need for a knowledgeable coatings contractor.

Well, that’s exactly what happened when a multi-national pipeline operator realized it needed to replace two tanks located at the end of a compression system. The tanks, which hold liquid wastes post-compression, including hydrogen sulfide (H2S), were at one of the pipeline company’s Texas sites. The pipeline operator had originally wanted to go with a coatings system with about an eight hour cure time. And although that doesn’t sound like such a long waiting period, the company quickly learned that it would have become a serious problem.

The 16,800-gallon (63,595 L) tanks and all equipment associated with the earlier stages of the process — producing wells, associated pipelines, and their compressors — would need to be shut off for the duration of the re-coating and curing. For the pipeline company, the conclusion was that an eight-hour cure time (where the coatings could never properly cure) wouldn’t work. Knowing this was not a viable solution, Curtis Kennedy III of Containment Specialties, Inc. approached the company with another option.

“It’s all about returning all of their wells back to production — they can lose money doing this. If the wells aren’t producing, they aren’t getting paid.”

“The cure time on our product is about a 20-second gel time, and in five minutes, you can walk on it,” Kennedy explained. “So we’re much faster on the return to service compared to what the previous company could do for them.” Their time-saving product: VersaFlex® VF-380™.

Containment Specialties, which started spraying polyurea products in 2008 in agricultural environments, recently switched over to industrial applications. But this job wasn’t all about the coatings. Not only did the pipeline company’s engineering department want to re-coat the corroded tanks, they also felt that the condition of the tanks was bad enough that they needed to start over.

The job of these two 20-foot-tall (6.1 m) tanks is to collect and hold any liquids that are removed from the natural gas at the compression stations. All gas must go through a refining process where it is compressed and where liquids that include waste, such as H2S, are removed. Although some of the discarded H2S gas goes into the tanks to solubilize, most of it falls out of the tank and drops to a flare to be burned. Therefore, with 20 percent concentrations of H2S in the liquid (where breathing a mere 1 percent, or over 1,000 ppm will cause instantaneous death), H2S was a serious concern for the Containment Specialties’ crew and a serious cause for corrosion on the tanks. 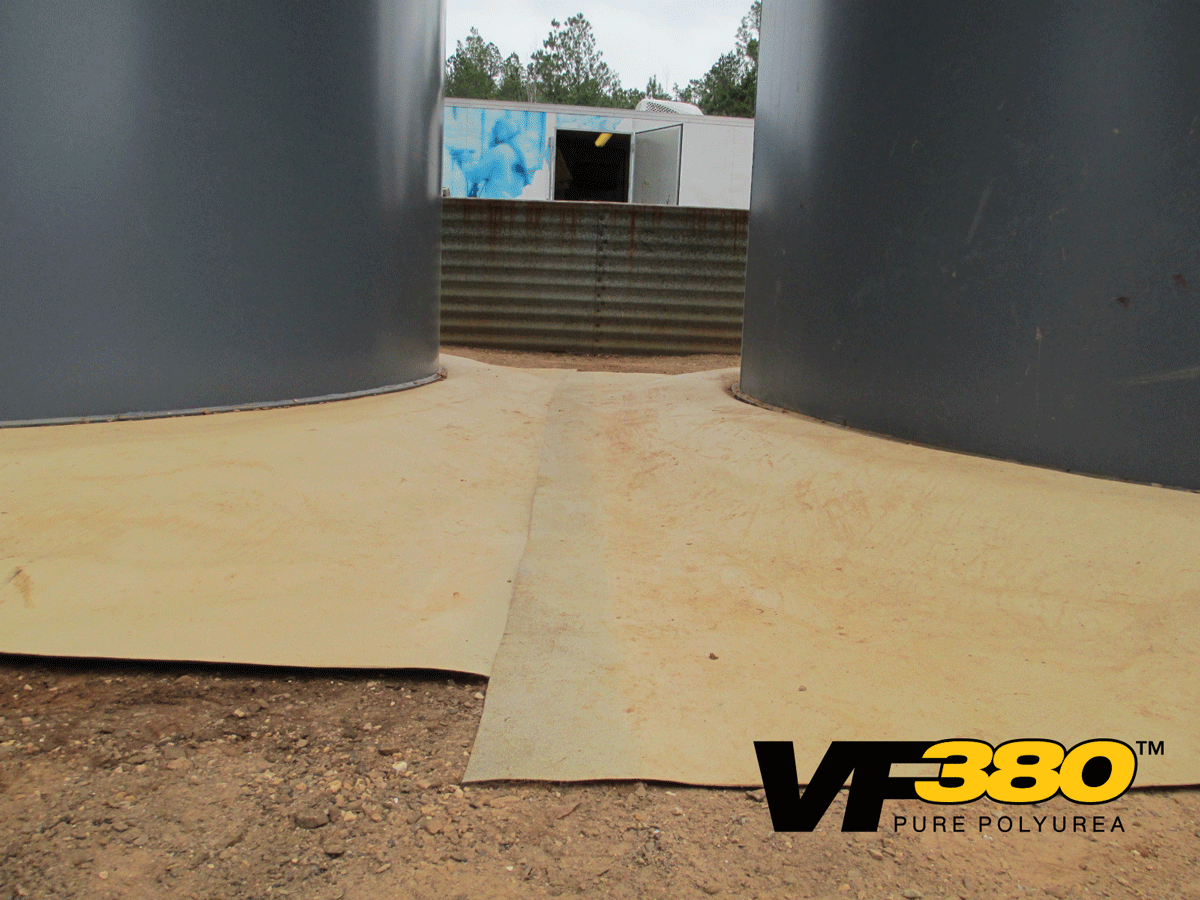 Since the old system didn’t have a secondary containment to control any leaks, any contaminated liquid being held in the tanks (and that wasn’t removed from the vacuum trucks) could have leached directly into the ground. It was obvious, then, that the pipeline company needed to replace the old, subpar system completely. Containment Specialties’ solution was something much more environmentally friendly and safe.

The pipeline company started the process by removing the decaying tanks. They then installed two pre-sprayed liners supplied by Containment Specialties. The pipeline company put the liners directly on top of the bare ground and then put encasing rings on top. (The rings are used to hold pea gravel for the tanks to sit on to help them avoid sitting in water and rusting.) Finally, they placed two new tanks on top of the rings to complete the first few steps in keeping the contaminated masses from leaching into the dirt.

“We’re a dealer, distributor, and installer for Sioux steel containment systems,” Kennedy explained of his Louisiana-based company. “There aren’t many people that do the metal work and the liners. They either put the rings up or the liners.” Having a turn-key company on site definitely proved helpful in the long run. It helped shorten the time needed to get the job done. And having the pipeline company do the prep work before Kennedy’s four-man crew arrived on site helped lessen some of the H2S contamination concerns…though not all.

Each crew member was H2S certified and trained and wore individual H2S monitors by RHI Technology Services throughout the job. Because the tanks weren’t in service while the Containment Specialties’ crew worked in situ (in position), H2S techs weren’t required on the job site. And because no gas flowed through the pipes or tanks during the job, the crew was only required to have a remote H2S monitor. There was also no need for someone to guard the site. The location was so secure that the crew had to go through three separate gates just to get to the tanks. What they did need, though, were daily safety meetings.

Kennedy made sure to have a job safety analysis (JSA) every day. One of the most important aspects of this meeting was to discuss where the muster stations were going to be located. The whole point of the muster stations was to get away from the H2S gases in case of an emergency, so the location of these stations depended on the way the wind was blowing that day. Find upwind and you’d find that day’s muster station! Also, because of the flammable nature of working around natural gas and its byproducts, all crew members wore fire-retardant clothing at all times. They also wore hard hats and safety glasses, and the person spraying wore a full-face respirator with organic vapor cartridges from 3M.

Once on site, it took the coatings crew two days to complete the rest of their job. They started by pressure-washing the three-foot-tall (0.9 m) wall that was used to enclose the 40′-long by 24′-wide (12.2 m by 7.3 m) containment area. Using a washer at 4,000 pounds per square inch (psi) (27,579 kilopascals) with a zero-degree rotating nozzle, they removed any and all oxidation from the galvanized metal walls. Then they removed large rocks inside the containment and made sure the rings had a bit of a slope away from the tanks. Once everything on the ground was even and the walls were clean, the crew added more liners to make a seamless containment around the tanks. The final prep step was to set up protective visqueen before spraying.

“Anything you don’t want painted, you’d better cover,” said Kennedy, “because that’s the first place [the coating’s] going to stick.” To help avoid overspray, the team wrapped all valves and piping using tape to keep it in place. With the site prepared to spray, the crew headed home for a full night’s rest. They knew the second and final day would be a full one.

The next morning, the Containment Specialties crew started on the process to create a monolithic containment. Using a Graco H25 proportioner that generates 2,300 psi (15,857.9 kPa) of fluid pressure, they sprayed the geotextile fabric liner with one 60-mil (1,524-micron) pass of VF380. The material, which uses a plural component, mixed in the chamber of a Fusion Air Purge .01 gun right before hitting the wall and liners.

The 1600-square-foot (148.6 m²) job started and ended quickly. The coatings cured quickly, and the only cleanup required was to remove all of the visqueen from the surfaces. They didn’t even need to clean their guns, since the A and B components of the coating mixed in the nozzle and not in the gun. The quick cure and cleanup proved to be crucial to the success of this pipeline company.

“It’s all about returning all of their wells back to production,” Kennedy said. “They can lose money doing this. If the wells aren’t producing, they aren’t getting paid.” So the quicker the coatings crew got the tanks returned to service, the quicker the pipeline company was back to making a profit. Two weeks was too long. But two days? That’s just the right amount of time to get the job done properly and get the tanks and, therefore, pipelines back in action.

Since the pipeline company is using this job as a trial run for Containment Specialties’ services, if all goes well, Kennedy’s crew could be looking at a much bigger project: spraying all of the company’s new tanks. Although it may not have started out as a large project, Kennedy knows you have to put in time up front to see the bigger payoff in the long run. And, as they say in Texas: You’d better go big or go home.