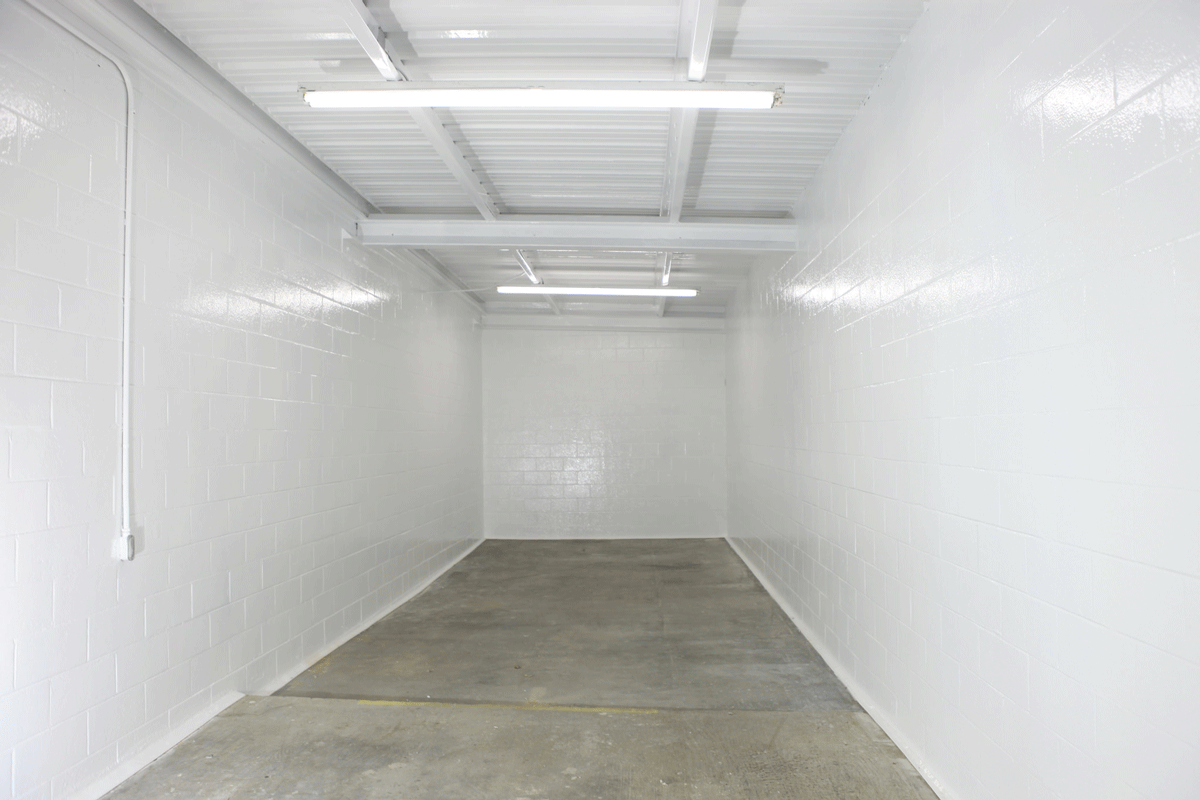 “‘Reshaping’ Processing Plants to Reduce Risk of Listeria and other Contaminants”

With news of more food processing facilities pulling product off the market and being temporarily shuttered due to potential contamination from Listeria Monocytogenes, the issue of plant sanitation, as well as design and construction, are at the forefront.

At issue are food and meat processing plants in aging industrial buildings with endless nooks and crannies, as well as right angled construction. In these plants, walls and ceilings are often constructed with angled steel, i-beams, concrete block, interlocking metal and fiberglass panels, double-t ceilings and tiles with concrete grout.

This provides a virtual breeding ground for standing water, dirt, dust, mold, and pathogens such as Listeria, E. Coli, and Salmonella. With so many cracks, pits, and seams, plants are at risk despite aggressive power washing and chemical sanitation techniques.

The fallout from a public recall due to Listeria extends well beyond the lost revenue from and extended shutdown and loss of inventory. Litigation, due to consumer illness and even death, as well as the devastating impact to the brand’s reputation can literally put a processor out of business.

On April 20th, 2015, Blue Bell Creameries voluntarily recalled all of its products on the market made at all of its facilities, including ice cream, frozen yogurt, sherbet, and frozen snacks, due to potential contamination from Listeria. According to information posted on the CDC web site, ten people with Listeriosis related to this outbreak were confirmed from four states, with three deaths reported.

The difficulty with Listeria is that it is good at evading detection. It can aerosolize or attach to equipment and people, and will thrive in cold temperatures. As a result, it is difficult to control in the processing environment. To combat this pathogen, many facilities rely on a robust sanitation program to prevent Listeria from entering or contaminating the environment. In addition, many processors engage in ongoing environmental sampling programs to monitor the efficacy of those efforts.

If any bacteria or contamination is detected, called “testing hot,” it can result in an immediate shutdown. Shutting down a food processing plant that is running 24 hours a day, seven days a week, can cost the processor millions in lost revenues. There is also the risk of fines by the USDA for repetitive violations.

In most instances, companies simply respond to a positive test by performing intensified cleaning and sanitization. Once the company’s follow-up sampling of the affected sites is negative, the issue is typically considered to be resolved.

In addition to concerns about bacteria, contamination also comes from facility maintenance issues, such as chipping paint, spalled and cracked concrete, and areas in the walls and ceilings that can collect dust, dirt, mold and other contaminants. 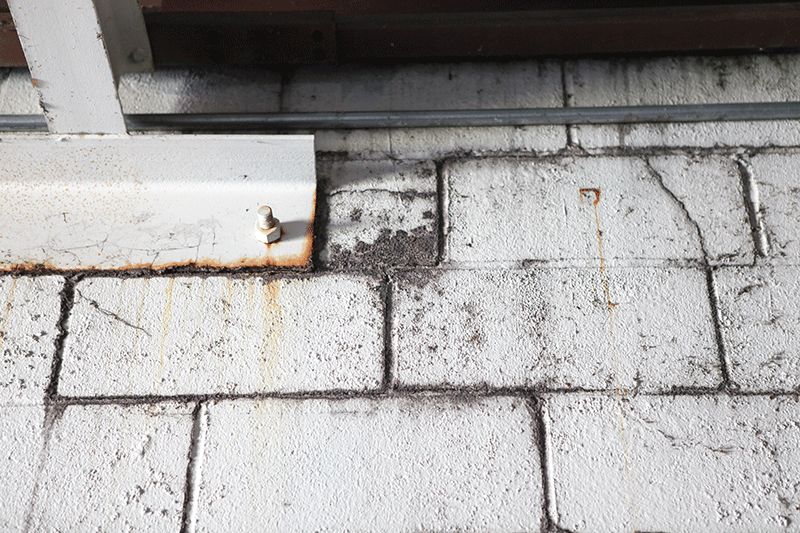 Until now, the costly and labor heavy solution was simply to clean more often and mitigate the problems using FRP panels or layer upon layer of paint to attempt create a cleanable surface.

However, the aggressive cleaning agents like bleach and detergents and heavy high pressure power washing cycles take a heavy toll on the paints, epoxies, concrete, fiberglass and metal surfaces eventually wear them away until they need complete replacement, or even worse, they jeopardize a plant shutdown and or fines.

This is a very costly, labor-intensive program that repeats itself in perpetuity at virtually every food processing plant across the nation.

To address this issue, new patented techniques are being used to deliver a complete rehabilitation of the walls and ceilings, often during planned maintenance weekends.

“Most other coatings take 1-4 days just to cure, which is too long when you need to get the plant back on line. Polyurea cures within minutes.”

At the forefront is Archdale, NC based Fixxus Rehabilitation Systems, a company that performs this type of work for well-known Fortune 500 food processors. Through a patent process of structural rehabilitation, precise surface preparation, retrofit design modifications, and a high tech food-grade protective polyurea coating and topcoat, Fixxus delivers a monolithic liner that eliminates all existing chips, seams, and gaps.

Furthermore, the space is “reshaped” through this process so only smooth, curved lines remain to eliminate areas where water, dirt, grime or pathogens can accumulate.

“We prep the surfaces and fill in all the joints, protrusions, and seams,” says Danny Cook, CEO of Fixxus. “Our goal is to deliver a monolithic system so that when they wash down there’s nowhere for water to stand.”

One of the key elements of the Fixxus process is application of an extremely fast curing, pure polyurea coating designed for use in food processing plants. Since the material is spray applied, it can be applied quickly by trained applicators and built up to any required thickness and shaped into the modified wall and ceiling design. According to Cook, polyurea is the only coating system available that can create a monolithic surface in the short time frame required to minimize plant downtime.

“Most other coatings take 1-4 days just to cure, which is too long when you need to get the plant back on line. Polyurea cures within minutes,” says Cook.

“VersaFlex designed a formulation for our use and this type of application,” says Cook., “They worked with us to make adjustments on the cure time, the gel time, and the topcoat.”

Due to the aggressive nature of plant wash downs, a custom polyurea topcoat is required to complete the process., The final topcoat creates a very slick surface, making it difficult for standing water, dust, dirt, or bacteria to take hold. To complete all this work, Fixxus works with the food facilities to plan and optimally time rehabilitation operations. ,This keeps plant, or area, downtime to a minimum. “These plants typically have only 2 to 4 days to get the work done,” says Cook.

According to Cook, completing the work in as little as a weekend or even four days is no small task. Most jobs require 15-20 workers, including a trained spray applicator.

Having worked in hundreds of food processing, cleanroom and pharmaceutical-grade facilities, the company is experienced in the details and standards for cleanliness and sanitizing. The entire workforce is fully trained on the smallest of details from wearing hairnets to wash down procedures. 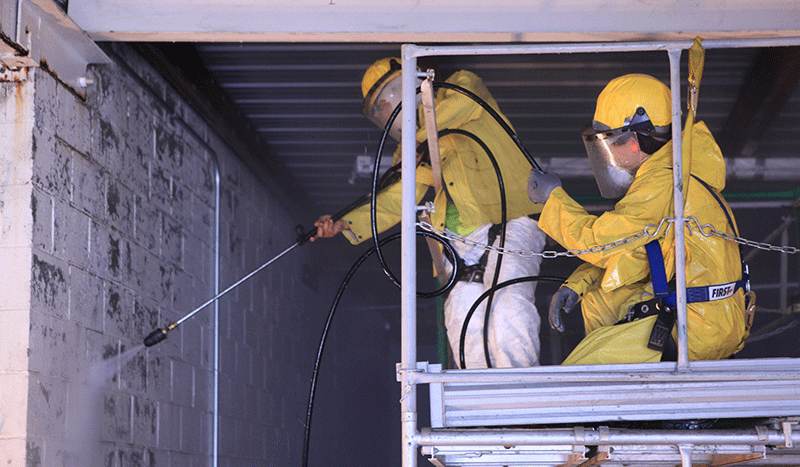 Before any coatings are applied, there are multiple steps to rehabilitate an aging food facility., No amount of cleaning will properly prepare a surface that requires repair. So the first step is to address any areas with spalled or cracked concrete, chipping and peeling paint, or heavy corrosion.

The next step is an intensive cleaning process to remove grease and grime and other surface contaminants that build-up as a result of meat processing, cooking, and general facility maintenance. This involves using specially approved wash down solutions and self contained high powered water blasting techniques. Then all holes, voids, seams and penetrations are filled, along with additional modifications for the reshaping. For example, a combination of concrete and molded foam materials are used to transition any flat surfaces from 90 degree to 45 degree to prevent standing water from accumulating.

These areas are typically include the cove joint from wall to floor, steel I beam bases, welded and frame bolted angle iron, and gaps in the current construction or wall/ceiling fascia. Standing water is one of the many contributing factors for Listeria and other pathogens, along with mold and corrosion. Finally, every piece of equipment, pipe, flooring, and other exposed areas must be wrapped in plastic or covered before spraying begins.

“It’s a lot of prep work and a little bit of spraying,” says Cook., “But the good news is we can get the plant back up and running by the time they need it.”

Fixxus also pays special attention to ensure the final monolithic liner is applied so the end result is cosmetically appealing.

“In many applications, such as the inside of large tanks, sprayed polyurea is not required to be cosmetically appealing,” explains Cook., “With a processing plant, everything needs to be trimmed out and the polyurea applied very evenly so the plant has a nice, clean look.”

For food processors in aging facilities this type of complete interior wall and ceiling rehabilitation — regardless of the surface or substrate and level of disrepair — may be the quickest way to break the cycle of constant deterioration and ongoing repair, while minimizing risk of pathogen-based product recalls.