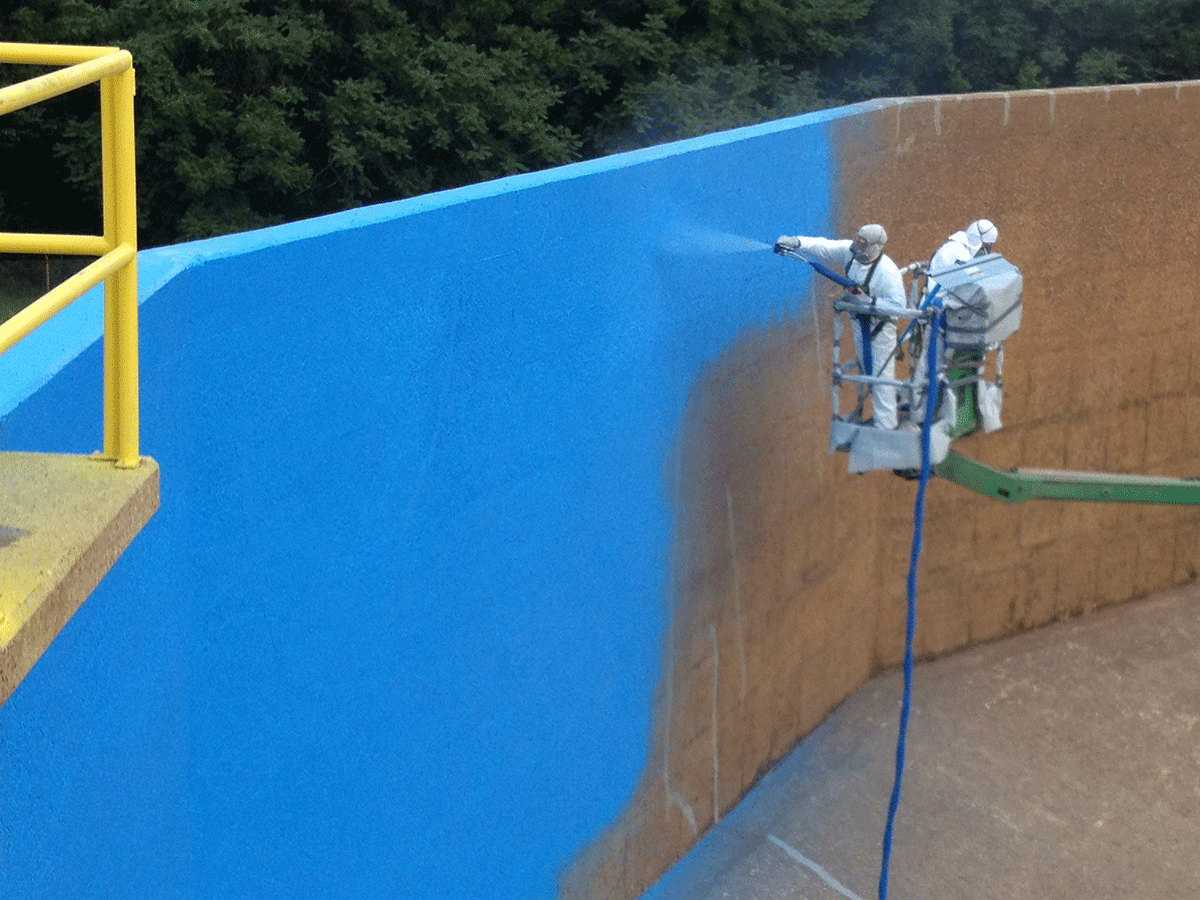 Redstone Arsenal, a large U.S. Army base in Huntsville, Alabama, had a decision to make: demolish or repair a 5-million-gallon concrete water tank that had been leaking for years but was still functional.

The tank, built in 1941, has had a useful life storing water for fire suppression as well as being a backup drinking water supply. The tank had hundreds of cracks and leaks, however, and was losing water at an appreciable rate.

“The concrete had cracked quite a bit,” says Brian Burgess, vice president of Contracting & Materials (C&M), a Decatur, Alabama-based specialty industrial coatings contractor. “The tank was losing a significant amount of treated drinking water, which is expensive.”

The largest and most durable outdoor tanks and reservoirs are constructed of concrete or asphalt. Unfortunately, a variety of factors ranging from earth movement to expansion and contraction from seasonal temperature changes can cause these structures to develop sizable cracks through which large volumes of water can escape. The weight of water in a large reservoir or tank can also cause concrete to move several inches. In doing so, tiny cracks in a drained reservoir or tank can open to an 1/8 inch or larger when filled with water.

When this occurs, facility managers must decide whether to demolish and rebuild the aging structure or find a way to extend its service life.

“VersaFlex polyurea sets up in seconds and can be put back into service as fast as an hour. It can take days for epoxy to cure enough to do the same. The time saved can provide tremendous savings to a facility.” –Brian Burgess

Redstone Arsenal’s Public Works Department evaluated its options for more than 10 years with no apparent solution.

Waterproof coatings such as epoxies are often applied to tank surfaces to address these issues, but most traditional coatings lack the flexibility to move and flex with concrete or asphalt and will eventually crack. Advanced polyurea coatings and liners deliver a strong, flexible waterproofing that bridges large cracks and can elongate up to 400 percent without cracking.

“Redstone Arsenal had attempted to use different types of liners over the years, but it wasn’t working,” Burgess says.

After Redstone’s recent success with the polyurea rehabilitation of a water storage pond, they recognized that they could use a similar approach on the leaking tank. C&M, the contractor on the pond, was also awarded the tank project.

A VersaFlex AquaVers® 405 pure polyurea coating was chosen due to Redstone’s potable water requirements. The product meets NSF/ANSI 61.5 requirements for both cold water and high temperature use up to 140 degrees, with a superior rating for a 1,000-gallon minimum tank size and no limit on the maximum coating thickness applied.

The spray-applied waterproof coating creates a seamless, waterproof, protective liner that stops leaks and strengthens the integrity of the entire storage structure. It is designed to withstand decades of freeze-thaw cycling and wide variations of temperature and humidity. It was issued a 75-year life span by Bechtel Engineering on the famed Boston Tunnel Project.

Because of the polyurea’s ability to set and cure quickly, it also minimizes downtime. This can translate into thousands of dollars per hour in savings at facilities requiring potable water and a source of emergency water for fire protection.

“The VersaFlex polyurea sets up in seconds and can be put back into service as fast as an hour,” says Burgess. “It can take days for epoxy to cure enough to do the same. The time saved can provide tremendous savings to a facility.”

After repairing all cracks over 1/8-inch wide with a concrete repair grout, C&M primed the concrete surfaces of the 5-million-gallon water tank with VersaFlex AquaVers® 20 primer, and applied 80-100 mils of AquaVers® 405 pure polyurea. The walls were completed first. Next they removed the heavy equipment from the floor. The tank base was cleaned again and primed before the final application of polyurea on the floor. From start to completion, the project lasted two months.

Two years later, both Redstone Arsenal’s polyurea rehabilitated 5-million-gallon water tank and the water storage pond have been inspected and remain in excellent shape, with decades of extended life expected, according to Burgess.

In some cases, polyurea can also be pre-sprayed onto geotextile fabric panels that are placed above the existing substrate. The panels mitigate the need for surface or crack repairs. Once in place, panel edges are then fused together with more polyurea.

The big challenge was finding a cost-effective solution. The 8.5-million gallon, 60,000-square-foot, 40-foot-deep concrete reservoir was up in the mountains, accessible only by a rugged gravel road. The reservoir’s location made it difficult and cost-prohibitive to jackhammer out the old floor and pour new concrete.

After considering all the options, the utility hired restoration contractor Ahbe & Svoboda to install a pre-sprayed composite panel system combining geotextile and a pure polyurea membrane from VersaFlex.

After removing existing reservoir piping and the synthetic rubber liner from the structure’s floor, a six-man crew installed AquaVers® 405 pre-sprayed geotextile at 80 mils to the interior of the reservoir walls up over its rock parapet. 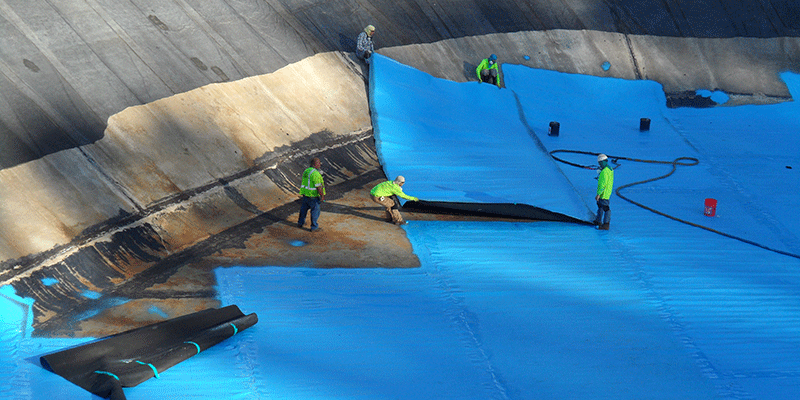 The pre-sprayed, 15- by 40-foot composite panels rolled out like a waterproof blanket. Once rolled out, the edges were matched, and the seams sprayed with AquaVers® 405 pure polyurea. The crew mechanically fastened the geotextile to the reservoir walls with stainless steel termination bars, and then sprayed over the bars. They also sprayed the polyurea on stairs, sumps and penetrations, and tied them to the geotextile.

Despite rain almost every day, the contractors finished relining the floor and walls of the Olinda reservoir in seven weeks. The polyurea panels solved the problem and the project was completed on time and on budget.

Del Williams is a technical writer based in Torrance, California. He writes about health, business, technology and educational issues.