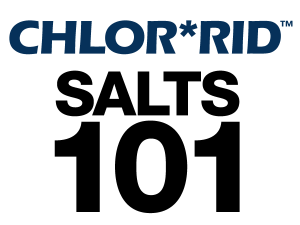 Soluble salts are very much at the forefront of discussion in the coatings industry. There is much information available on the topic, but often is provided in small segments so a complete comprehension is not easy to grasp. It is the purpose of the following to provide an overview to assist in bringing those pieces together.

How are specifications changing?

As few as 4 or 5 years ago, specifications and surface preparation instructions rarely called for testing of salts or for limiting them. Today, testing and allowable limits are included in a large percentage of specifications. In a few short years, it is probable that most all specifications will address salts in some manner. Facility owners are beginning to understand how salts are causing coating life spans to fall short of their intentions and coating manufacturers are finding salts the cause of increasing warranty claims. Consequently, coating professionals throughout the industry are making changes in specifications.

For decades the coatings industry has worked with visual standards and visual comparators. As we begin to deal with soluble salts, which are corrosive even at very low levels, we enter the realm of non-visible contamination. As has been said many times, “Old habits die hard”, especially in an industry steeped in perpetuation of established practices. Engineers, specifiers and coating manufacturers are now requiring testing and are setting allowable limits; however there is resistance to change, so such efforts are not always successful. To provide a sound specification for surface preparation, the specification writer must understand the significance of these salts, the problems caused by salts and the appropriate methods of testing evaluating and removing salts. Some specifications without a good understanding of the interaction of salts on metallic surfaces and, consequently, many specifications still do not capture the essence of testing and decontamination that would effectively provide for maximum coating performance.

Surface contamination by soluble salts has long been an issue for the corrosion industry, however, it was the discontinuance of lead-based paints that caused a renewed look at salts with regard to coating service life and their involvement with premature coating failures. A unique property of lead compounds is that they are capable of binding up soluble salts, thereby preventing salts from causing or increasing the corrosivity of the immediate environment. The widespread use of lead-based paints gave us a sense of security but the discontinuance of such products requires that we re-evaluate surface preparation requirements.

What are soluble salts?

An explanation voiced in a NACE (National Association of Corrosion Engineers, International) committee meeting some years ago stated that anything conductive should be considered a salt. Coating professionals had long realized that salts were detrimental to the substrate and to coatings. Though they did not have the means for testing that we do today, thy realize that if a clean uncontaminated surface were washed with DI (de-ionized) water, that the water remained relatively non-conductive, but when contaminants were present an increase in conductivity was observed. Since they did not have the means to identify specific ions, especially in the field, estimates were used to determine percentages of chlorides and other ions based on assumptions. Since then, it has been found that these estimates are highly unreliable, but today we do have the means to identify and measure specific ions that are of primary concern. Everything conductive is still considered a salt; however, this conductivity could be comprised of hundreds of different chemicals and not all salts are detrimental to coatings.

Soluble salts are described in the Society for Protective Coatings SSPC, Protective Coatings Glossary as – “An ionic chemical compound that dissolves in water to form a solution of positive and negative ions”. Clearly, the cleaner the surface, the better the coating performance, but some conductive materials have little effect on corrosion or coating performance, while other conductive materials can effect it to a great degree.

The prime detrimental salts most commonly encountered are chlorides, sulfates and nitrates, though specific industries may encounter others. These salts can be so detrimental that they can cause premature coating failure in as little as weeks in the right environment. These salts definitely can affect the overall life spans of coatings, even if the coating system survives beyond the warranty period.

The question industry is asking today is “How much of what salt can be left on a surface and not significantly affect coating life spans?” There are so many different coating systems available and so many different operating environments that a consensus number will probably never be developed or standardized. As time progresses we are continually gathering more information as to what has and has not worked. NASA engineers identified chlorides for their extreme corrosion effect in the late 70’s and they established a chloride threshold limit of 5 micrograms per square centimeter (mg/cm2) as the acceptable limit on surfaces prior to coating. Although there was no adequate, reliable and accurate nondestructive test method for metallic surfaces, NASA held firm with their specification (KSC-STD-0001-D). Until recently they had to allow contractors variances to specifications because of the inability of contractors to meet the specification limits.

Further discussion can be found in the full PDF download.